Last week’s annual Jisc Digifest was aesthetic and high-tech from the get-go. The opening ‘folded space‘ session brought together artists from across Europe to participate in an impressive synchronised performance of dance and music, all made possible by the Janet Network. Even the conference’s byline ‘shaping education for a hyper-connected world‘ sounds more sci-fi than HE. As opening Key note speaker Anne-Marie Imafidon, CEO of the Stemettes, pointed out – the web is 30 years old  now and it’s time for us to get more creative in our thinking! 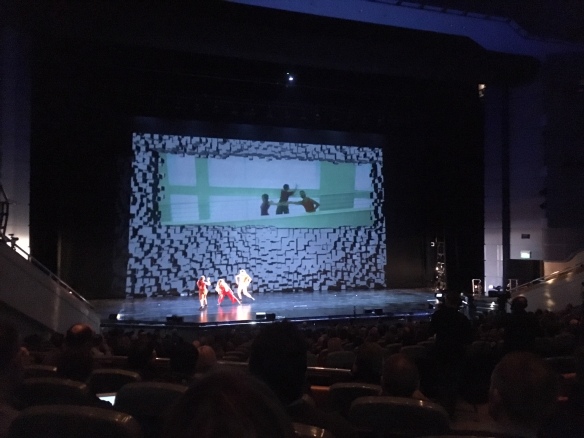 So what were the core themes?
Creativity

Creativity and the changing skills requirement of our students and staff was prevalent in many presentations and discussions. From the A for Art appearing in STEM (STEAM),  to multidisciplinary learning and rethinking the way we do things. Dave Coplin, CEO of the Envisioners, offered some great observations on this in his day one closing keynote entitled the rise of humans. Dave suggested that we focus on creativity, empathy and accountability. This will allow us to get rid of processes that don’t make sense (ditch the elephant powder), disconnect unless it adds value and use Artificial Intelligence (AI) wisely (see project InnerEye). 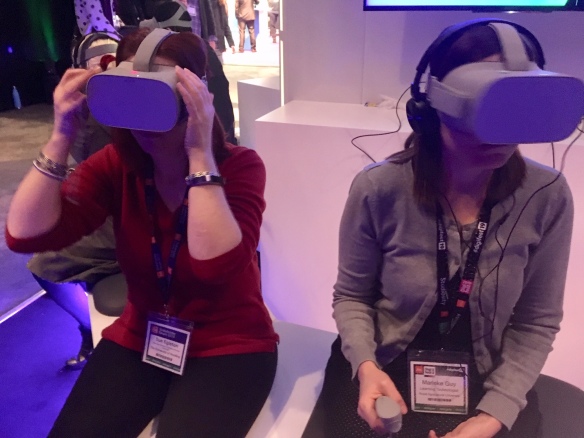 Experiencing life as Natalie, a student in 2029, through the power of VR

Dave reminded us of the wise words of Pablo Picasso: “Computers are useless. They can only give you answers.” We need to be asking the right questions – and that’s where our creative minds come in. He concluded by pointing out that culture is the single most important attribute for an organisation to get creativity and innovation right. You can have all the technology in the world and it isn’t going to change any outcomes.

Joysy John, director of Education at Nesta also discussed the skills gap in her opening keynote for day two. Nesta want to create a broader, fairer and smarter education system that focuses on how can all learners thrive in the future. They have identified the current skills gap that sits alongside recent narrowing of the curriculum. Joysy spent time looking at the new(ish) skills most needed (see the picture below) and asked is our education system teaching these skills? 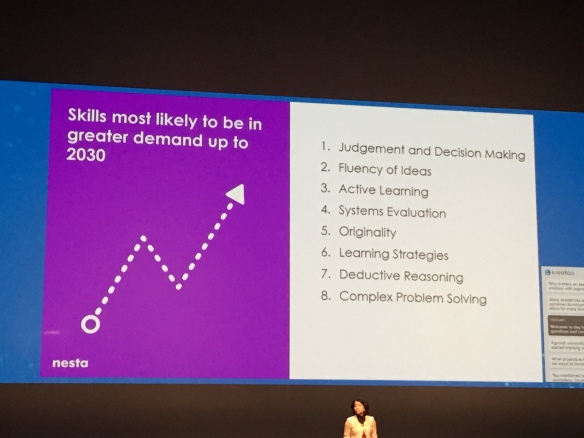 Joysy John talks about the skills required for future work

Nesta Education has developed some very useful tools including My kinda future, Get my first job, and the UK skills taxonomy which looks at the digital intensity of jobs. Joysy reiterated the message about removing the distinction between arts/humanities and the more technical and scientific subjects.

Many of the plenaries and sessions covered the new technologies that make up Education 4.0.

These range from exciting use of Virtual Reality (see the VR Education work) to data analytics and Artificial Intelligence (AI)  and Machine Learning. However ethics is a big issues and while AI (and other Education 4.0 tools) offers us a multitude of opportunities it still needs to be kept in check. Anne-Marie Imafidon’s point that if “If you don’t intentionally include you accidentally exclude” highlights the need for diversity in testing. And Nesta’s recent blog entitled AI is changing the world, who is changing AI? is really thought provoking. As Dave Coplin put it “the best defence against algorithmic bias is diversity.”

The 4.0 technologies were explored in more detail in the over the horizons panel session on the Jisc Horizons report – emerging technologies and the mental health challenge. The session was chaired by Andy McGregor, deputy chief innovation officer, Jisc. The speakers were Sarah Davies, director of education innovation, University of Bristol; Nick Brazil, deputy principal, Gower College; Rachel Hall, university editor, The Guardian and Gwyneth Sweatman, president, NUS Wales. The report looks at “the fourth industrial revolution in which emerging technologies such as artificial intelligence and the Internet of Things blur the lines between the physical, digital and biological spheres and the impact and change it brings for education“. Audience questions covered areas including the need for National digital vision, costs and funding, and issues around Mental health. 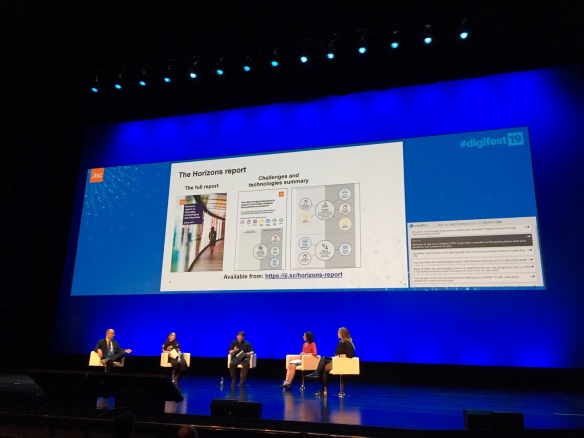 Over the horizons panel session

One interesting concept covered in the report is ‘streamlining’ – or technology enabling us to get to the information we need much quicker. There is a quote in the report from Phil Richards, chief innovation officer, Jisc that explains:

“I see the technology as a human optimisation system, so the meaningful support people get … comes from human beings. It’s that initial referral, realising that the people who need help are those who’re least likely to ask for it when they’re in a dark place, which the technology helps with.”

It’s about a partnership between technology and humans. That’s where Chatbots come in. In the future is conversational the University of Bolton demonstrated their bot Ada (named after Ada Lovelace) who is acting as a virtual assistant for staff and students. Bolton began by connecting the chatbot to all key data sets on campus (student records data (tribal), email, curriculum resources, timetabling, qualification, attendance, opening times, finance/bursaries etc.). They are using around 12000 variations of questions and have even tied Ada in to Wolfram alpha.

The end result helps students with general inquiries, curriculum specific queries, employability; and staff with questions like who is on work placement? Which learners have passed? Which learners have falling attendance? All responses are contextualised.  Ada also nudges students with welcome back message, attendance message etc. The system is voice activated (Alexa), and works on app (ios, android) and desktop. There are Central APIs that route info to IBM watson, Wolfram Alpha , campus data.

Bolton are not the only institution delivering on chatbots. In his talk on How you are embracing the change of technological capability, and the needs of the students of the future, not the past? Andrew Proctor, Director of digital services at the University of Staffordshire talked about their own experience of  AI becoming the new UI. Staffordshire have developed Beacon as a way to curate information, offer recommendations, nudge students etc.  To do this they used an Azure bot framework and natural language processing. A partner was brought in to help them deliver Beacon and Azure stack accelerated the process. 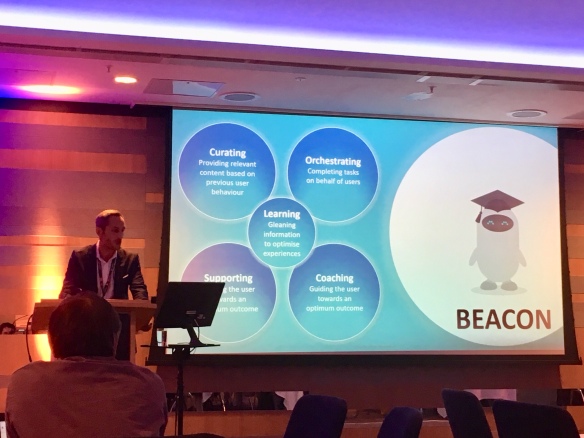 With so much going on many institutions have taken to creating and implementing digital strategies. Ross Parry presented the University of Leicester experience to a packed room. Ross has a split role of Deputy Pro-Vice-Chancellor (Digital) and professor in the School of museum studies, demonstrating the commitment Leicester has made to digital. Leicester have taken their magic word (‘discovery’) and combined it with a beginners mindset to build their digital strategy. It stands as an cornerstone with other enabling strategies underneath. Ross explained that Digital is about people and value and culture, and a strategy is aspirational, a thing that you create and use. He recommended that institutions worry about digital thinking as much as they worry about the infrastructure to support it. 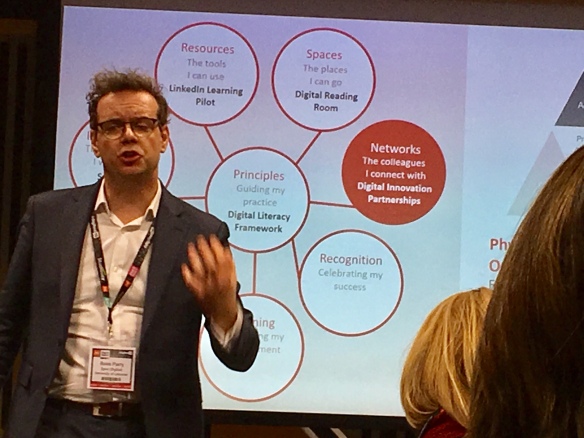 Ross Parry on Digital capability as a strategic priority

The Leicester #digitalcampus strategy is underpinned by 20-30 live projects, it has a supporting model – an animated picture of buildings. This could even be seen as cute and gimicky mnemonic. To deliver the strategy Ross has worked in partnership with the Leicester director of IT – Liz Bailey, the duo have worked together on the three cores areas: new  integration, new interface, new interaction. The new interaction refers to work to make their student records system talk to their VLE, something that has involved rebuilding things from the ground up (they have made good use of Top hat to do this). Migration of data and information was carried out by students as part of the ‘big build’ and everything has been supported by great visuals and infograms and a steer from senior management.

In his talk Andrew Proctor also shared many of their Education 4.0  approaches to strategy: more learner centric, more choice (hyper-personalisation), diverse consumption models, traditional byte sized degrees, subscription based, outcome based. He talked of “building things to change” – recognising the fast moving world we are in and being agile at all times.

And finally MS Office 365 and a little bit of Google 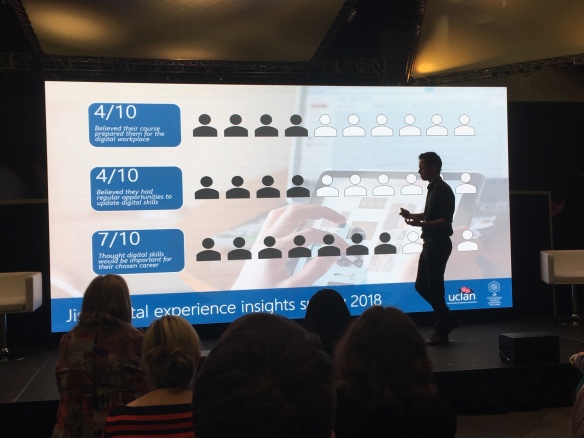 The team have brought in a Digital skills programme that relies heavily on Microsoft Teams and Microsoft educator community training and Microsoft office certification. Their Digital transformation at scale event 17 April UCLAN would definitely be good to attend and I’d like to hear more about Use One note for digital portfolio. Lots of institutions are turning to Microsoft for training , accreditation and certification.

The closing keynote was delivered Head of Google Education, Liz Sprout. After some audience App sharing (try it – share your favourite app with a random stranger) she spent time explaining the difference between Machine learning and Artificial Intelligence (thank goodness – I was too embarrassed to ask). Machine learning comprises of supervised learning, unsupervised learning (discovering patterns) and reinforcement learning. It is now possible due to the amount of data, the speed of processing data, minaturisation, reduced power consumption and improved cooling systems. And ML powers most of what Google does: search, gmail, photos, translation, YouTube, chrome, maps…

Liz introduced us to many of the great Google tools out there. Some of  the best for education are: 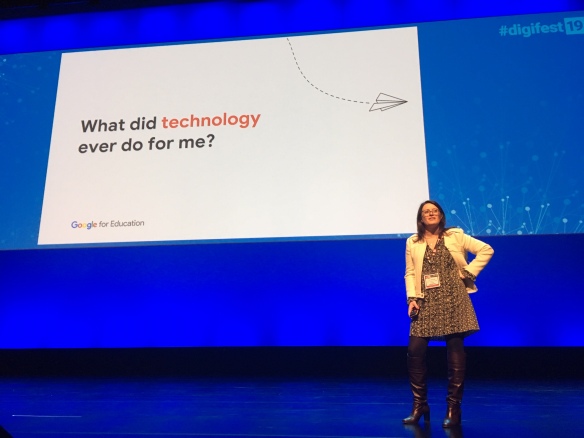 Naturally these themes are shaped by the sessions I attended and my own personal interests. There was a lot more on the digital campus, digital capability, data ethics, student wellbeing, accessibility and multimedia that I haven’t even touched on.

Luckily Jisc do a good job of videoing and collating their content – so here is everything I missed.

Once again Digifest is invaluable for those working in technology in Higher Education. It always inspired – now to find a way to create more hours in the day!