Today Rachael Foy (senior lecturer, RAU) and I attended the Mahoodle for digital assessment one-day conference at Cranfield Defence and Security (CDS), part of Cranfield University, based at the Ministry of Defence establishment at Shrivenham.

Cranfield University, along with Southampton Solent University, have been a little like RAU’s big sibling in our VLE transformation process. They have been metaphorically holding our hand, inspiring us and offering us support and guidance throughout – for which we are very grateful. This one-day event looking at moodle and Mahara, both open-source tools that we use at RAU, was something weren’t going to miss.

The day comprised of a good mix of plenaries, show and tells and workshops.

Dr Mark Glynn (Dublin City University) gave us an overview of the 12 principles that they have established as part of their Academic integrity project. The principles will lead in to development of a toolkit which will include Case studies, self-assessment checklist, collation of resources. 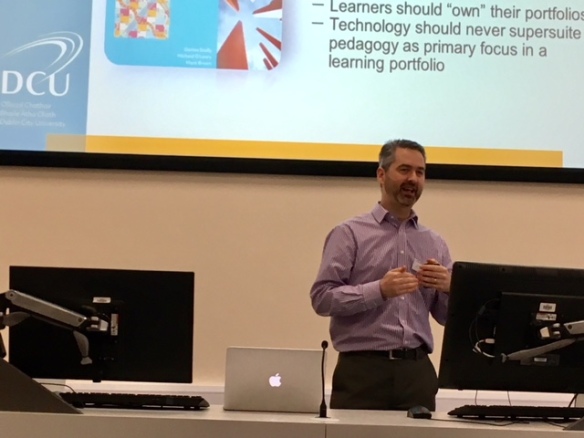 Mark also shared a whole heap of ‘giveaways’ including a rubric giveaway and an ebook on eportfolios.

Aimee Helliker (Lecturer in Military Engineering Weapon & Vehicle Systems, Cranfield University) explained how she has managed to get students engaged prior to the start of their module using a few minor tweaks. She has change the term ‘pre-reading’ to ‘pre-work’ and explains that the student needs to dedicate time to the module before they start. She has also been more explicit about the reading required and gives clearly directed reading which involves identification of chapters considered using formative assessment consisting of a pre-work quiz and pre-work reflective question given within the opening lecture.

Roger Emery (Head of Learning Technologies, Southampton Solent University) and Edd Bolton (Learning Technologist, Southampton Solent University) provided an overview of their recent work on their myportfolio Mahara system. SmartEvidence allows you to work with competency frameworks in Mahara and associate them automatically with an evidence map for a visualisation of the competencies already gained, in progress, and not yet started. At Solent they have created templates for Competency based frameworks developed with JSON files.

Jane Watts and Mike Wadley from the Defence Academy elearning team talked about some of the security challenges of working in the MOD in relation to their Virtual Learning Environment. So for example they can’t allow upload of materials by students or marking online and assessments need to be locked down. The site also needs to pass penetration tests. This year’s approach has been implementation of an assessor role which will ensure that all assignments are classified officially.

Steve Powell (e-learning team leader, Lancaster University) presented their new approved policy of 100% online submission and paperless feedback. The policy is supported by a move to Moodle assignments away from use of Turnitin.

Bob Ridge-Stearn (head of e-learning, Newman University) gave an overview of how Newman have applied a lock down approach to their moodle assignments – they all have the same settings. Academics can flag that they would like assignments to be set up different but this is controlled centrally by elearning.

After lunch and an amazing tour of the Technology School (think big tanks, helicopters and guns!) Aurélie Soulier and Sam Taylor (Learning Technologists, Cranfield University) ran their Portfolio Assessment Workshop. They had us designing an assessment that could be used to road test their Evaluation Checklist.

Joey Murison (Catalyst IT Europe) then gave a demonstration of the key new features in moodle 3.5 and Mahara 18.04. He wins the award for the best analogy of the day: “open source is free, like a puppy – it needs food and water and love”. Joey’s main suggestion was that we aim to go for Long Term Stable Releases (LTSR) if possible, these versions are designed to be supported for a longer than normal period. The next LTSR of moodle is 3.5, which is out fairly soon. The recent versions of moodle have had relatively few additions due to the main focus being on GDPR compliance.

Richard Oelmann (Senior System Developer, University of Gloucestershire) demonstrated their progress in SITS and moodle integration and Submission from Mahara into moodle.

Andrew Field (e-learning manager, Cambridge Assessment International Education) talked about rubrics, badges and their custom plugin team project which allows team submissions. They will be releasing later on in the year.

Gill Ritchie (Learning Technologist, Queen Mary University of London) gave an honest account of her experiences in using Mahoodle for assessment. They have been using it on the PGCAP they run which is attended by Learning Technologists. They’ve had mixed results and many people have found Mahara hardgoing. The single column view use (see below) being a good example of a fail.

Brett Lucas (e-learning Policy and Change Manager, Queen Mary University of London) and Rumi Begum (Learning Technologist, Queen Mary University of London) shared their QMUL Model which is an initiative to broaden opportunities for Queen Mary undergraduates within by allowing them to study modules outside of their main curriculum. The model is built around networking; multi- and inter-disciplinarity; international/global perspectives and enterprising perspectives. They are using Mahara as the main portfolio tool.

The final session of the day was the Mahoodle Clinic facilitated by Roger Emery (Southampton Solent University). The questions are all available on Padlet.

A great day with lots of ideas to keep us busy!